Tens of thousands of years ago, humans formed a unique bond with one particular animal, the wolf. And over time with years of interaction and intervention, these wolves transformed. They became docile and less fearful. They changed in appearance, becoming smaller with floppier ears and curled tails. They even learned how to read human facial expressions and take commands. In effect, they were no longer wolves, but an entirely new species — the dog.

Dogs, like many other domestic animals, are naturally accustomed to being around humans, in fact they love it1. The exact opposite, on the other hand, is true for the wild wolf. These animals are normally afraid of people and avoid them2.  So exactly how did this transition take place, and why are dogs so much different today from their wild predecessor? Researchers are not entirely sure of their answers, but many believe that in order for us to better understand the process of domestication, we should consider epigenetics.

Epigenetics refers to the chemical modifications made to DNA that do not alter the underlying base-pair sequence, such as the methylation of cytosine and the different histone alterations. These modifications affect how genes are expressed and can occur in response to various environmental challenges. Transpiring throughout different life phases, including prenatally, studies have shown that epigenetic modifications can cause cellular adaptations that affect disease and stress susceptibility as well as changes in behavior. Even more, some of these changes can be passed on to future generations.

Domestication is a form of evolutionary change whereby a species transforms genetically and phenotypically in response to the pressures of living with humans3. Generally, evolutionary changes are associated with genetic variants or mutations that occur randomly in a species followed by selection (Neo-Darwinism). But, acquiring an alteration that actually works and will stick can take a very long time, like about a million years. This leads us to reason that the rapid rate at which domestication occurs cannot be entirely explained by sporadic mutation in the genome.

Evidence over the last 20 years in the field of epigenetics has demonstrated that phenotypical differences in like organisms correlate to changes in gene expression4. It’s well reported that environmental signals can modify gene expression and that these acquired epigenetic marks can be inherited.  While epigenetic marks can fade– as they are dynamic in nature– they may also persist depending upon the context of their use. In regards to domestication, animals kept in captivity are exposed to the same environment generation after generation. Thus, inherited altered gene expression patterns are maintained in conjunction with their induced phenotype.

Researchers have used DNA sequencing to compare domesticated animals to their wild counterparts only to find that genetically the differences are slight. What they are finding, however, is that gene expression profiles vary broadly between corresponding species. For example, in chickens, DNA methylation levels are higher in the brain regions of the domestic type5. And in dogs, modifications of mRNA expression patterns in select hypothalamic genes are associated with domestication6. But how do these epigenetic variations factor into domestication? Research has yet to make a clear-cut connection, but the consensus is that epigenetics does play an important role in this evolutionary process. 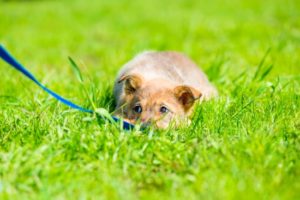 Dogs are probably the most varied species on earth in terms of just size and color, and yet they are all (even the tiny toy poodle) descendants of the grey wolf. Thousands of years socializing with people and human intervention have drastically changed these animals, but it’s their behavior that most strikingly sets them apart from wolves. A dog’s friendly disposition and innate ability to respond to human social cues, very similar to that of a human infant, is not something naturally found in wolves, or for that matter in any animal. However, wolves and other animals can develop these behaviors after extensive human contact, suggesting that frequent contact may be a first step in the natural process of domestication.

This has led many scientists to believe that wolves may have domesticated themselves simply by hanging around humans. Although, the true origin of the dog is still being investigated. Because domestic animals are less aggressive, scientists suspect that the wolf to dog transition may have had something to do with alterations in the hypothalamic-pituitary-adrenal (HPA) axis, a group of organs that control stress reaction, and serotonin, a neurotransmitter that regulates emotion7. These two areas are closely cross-regulated under physiological conditions.

Studies have shown that pro-social behavior, which increases serotonin levels, modulates the activities of the HPA axis via epigenetic mechanisms. This, in turn, lowers cortisol levels allowing for increased social learning capability. The hypothesis is the less stressed human-associated wolfs were able to broaden their social skill to interacting with people due to epigenetically decreased cortisol levels.

Over time, the wolves that became tame grew into dogs, more capable of understanding human behavior and verbal communication. They also differed in physical characteristics or phenotypic traits – many which have been found to be related to certain genes as well as epigenetic alterations8. By comparison, dogs show genome-wide methylation differences in over 24,000 cytosines with species-specific patterns of differentially methylated regions (DMR) at 68 sites9. As DMRs are often linked to functionally relevant genes such as neurotransmitters, it implies that selection during domestication not only acted on these genes but also affected methylation patterns.

The Chicken, the Egg, or Epigenetic Inheritance

Dogs are believed to be the first domestic animal, but chickens, along with pigs, cows, and several others have evolved in the same way to live alongside humans . Although it’s difficult to find epigenetic-type domestication studies on many of these animals, researchers in the field have compared the modern day egg laying chicken (White Leghorn) to its primary progenitor, the wild Red Junglefowl. One investigation in particular on these birds chose to determine if changes in gene expression acquired from the stress of captive living would be sustained in future generations.

It’s estimated that chickens were domesticated from the Junglefowl ­approximately 8,000 years ago and today they differ remarkably in morphology, physiology, and behavior. For instance, modern chickens are twice the size of the Junglefowl and lay a great deal more eggs that are larger and varied in color. They are also less fearful and have adapted to eating and breeding in captivity. It’s assumed that these characteristics, which are evident in other domesticated animals, are essential for living in human controlled conditions. It is also implied that epigenetic modifications may be responsible for these wide-encompassing phenotypic changes, especially since they come about in such a short evolutionary time span.

SEE ALSO:   Bolstering Your Defenses Against COVID-19: An "Epigenetic" Diet

The study began by raising both birds on unpredictable light schedules10. Because neither of the fowls feed in the dark, not knowing when to eat caused them chronic stress. This resulted in spatial learning difficulties which were apparent in their behavior as they were unable to navigate a simple food maze. Postmortem, the birds displayed modified gene expression profiles in the hypothalamic region of the brain (fear and stress response area). However, gene expression and promoter methylation in these regions significantly differed between the breeds.

The offspring of the two were examined and the researchers soon discovered that the epigenetic modifications in addition to adaptive behavior were only inherited in the domestic Leghorns, not in the Junglefowl. This suggests that the breed differences may have been caused by selection during domestication for increased ability to respond. Plus, much of the differential methylation was maintained in the following eight generations.

Perhaps it’s the ability to adapt epigenetically that favors a particular candidate for domestication. Even though the underlying mechanisms causing the differences in this study are not known, it does point out the importance of reliable inheritance of epigenetic state, which may have been fundamental in the Leghorn’s rapid development. So, to answer a popular riddle: epigenetic inheritance came first, then the egg. 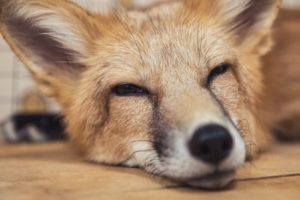 Animal domestication may be considered short on the evolutionary time scale, but going back 10,000 or more years to investigate it is not an easy task. Archeologists still don’t know exactly when ancient people first start living alongside animals, but we are learning more about how the changeover might have occurred. In a study spanning several decades, an attempt to recreate the process delivered astonishing results.

In the 1950s, Russian geneticist, Dmitri Belyaev, set out to study the evolution of domestication first hand. His goal was to tame foxes, a species closely related to the wolf but known to be inherently wild. By mimicking the wolf’s supposed transformation, his intent was to unravel the mystery of dog’s route to domestication.

He and his team began by selecting foxes solely for submissiveness and amenability, and then bred them in succession. Surprisingly, the offspring exhibited significant changes in just a few generations. The foxes went from being merely tolerant of their handlers to actively soliciting their affection. More changes took place over time as well. Their ears became floppier, their legs, tails, and snouts became shorter, and their fur lighter and varied in color. They were also able to breed out of season, having on average larger litters.

Sixty years later and the experimental foxes now look and act more like dogs. Researchers who have studied them believe that the new phenotypes that have emerged are most likely due to changes in gene activity, principally epigenetic modification11. For instance, hormonal changes under domestication are known to affect both gene silencing and gene activation. The domesticated foxes in this study displayed higher levels of serotonin compared to the wild type, with differences in the activities of key enzymes involved in its degradation and production. This agrees well with data concerning serotonin’s influence on inhibiting aggressive behavior. In addition, coat mottling and spotting are characteristics found in many domesticated animals and were observed too in the tame foxes. It’s presumed that the mechanism responsible for the spotting may have been an inherited functional activation/inactivation of the Star gene, which affects the migration rate of melanoblasts12. The mottling, it seems, could have been attributed to the methylation state of the Agouti gene, which is responsible for fur phenotype in dogs and other animals.

Further study would be needed to identify the exact genes and epigenetics mechanisms involved here, but the Russian experiment was successful in rapidly creating a unique population of domesticated foxes. It demonstrated that selection for tameness –the premise of how dogs may have evolved – produced a range of morphological and physiological traits characteristic of other domestic animals. The study also showed that selection affected the genes that regulate neurohormonal status, and that some became fixed by 8-10 generations. This suggests that the fixation might have changed the activity of many other downstream genes, producing new patterns of gene expression and new phenotypes.

Where would we be today without domestic animals? They have significantly contributed to the advancement of humankind. Our mutual relationship has definitely benefited us, if not them too. We rely heavily on farm animals for a variety of goods and are emotionally connected to our pets. Through domestication, certain species that may have otherwise perished are surviving longer. For instance, many wild-types such as wolves, buffalo, and various fowl breeds have drastically diminished over the years as our population grows.  Yet, their similar domestic counterparts have thrived under our care. But not all animals were meant to be permanently tamed and it’s crucial that we don’t interfere with that. At the same time, we should understand how human involvement influences nature and all living organisms.

Studies on epigenetics might help define more precisely the underlying effects of domestication and determine if a manmade environment positively or negatively impacts the biological functions of animals in our care. These studies and others could also shed light on our own evolutionary process – something that we’ve curiously sought after and hope to learn more from.